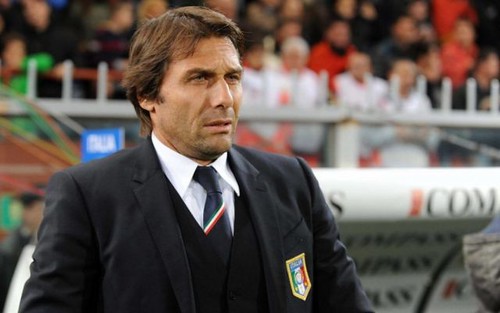 "Clamoroso ! Due esclusioni a sorpresa nei 23 scelti da Antonio Conte" by NazionaleCalcio is licensed under CC BY 2.0

Highlighting every Antonio Conte teams coached, trophies, awards and performance that led to his current level as one of the best Italian football managers.

Antonio Conte is currently one of the most talented managers of world football who’s has managed some of the biggest clubs in England and Italy.

The Italian is most notably known for his ability to accelerate the growth of a team in some cases less known players in his squad.

Today, Conte is among the high profile coaches of modern-day football. Some of the major trophies Antonio Conte has won as a manager include the Premier League, Italian Série A, FA Cup and Supercoppa Italiana, etc.

How many trophies has Antonio Conte won? The Italian manager has won nine major trophies which include one Premier League, one FA Cup, four Série A, two Supercoppa Italiana and one Série B.

Antonio Conte trophies in a nutshell

Antonio Conte is one of the most successful Italian football coaches at the moment. Following his retirement from active football, he went into coaching and eventually led some of the biggest European clubs to victory.

So far, Antonio Conte has won seven major trophies which include four Italian Serie A, one Serie B, two Supercoppa Italiana, one Premier League and one FA Cup. He also led Inter Milan to second place in the 2019–20 UEFA Europa League.

Conte began his career in soccer management as an assistant at Siena in 2005. He held on to his position for just a year before heading for a new role at Italian Serie B side Arezzo.

Following his departure from Siena, Conte was appointed head coach of Arezzo where he spent two seasons with the club.

Although he was still new in the business, he showed some promising signs while leading the club. However, a series of disappointing results led to his exit from the lower division club.

His appointment at the club saw a significant rise in terms of performance for Bari who had endured strings of poor results in the Italian second division.

During his first season, he guided the club out of relegation waters finished in midtable at the end of the season.

Since he’s brought a phase in the history of Bari, the club’s top hierarchy offered to keep him at the club ahead of the club’s new campaign in the Série A.

Following the success with Bari in the Italian football lower division, he was linked with several top jobs in the country.

His impressive stats with Bari in the Série B had already attracted interest from several top-flight clubs like Juventus, Atalanta, etc.

However, Juventus decided to go elsewhere with their plans for a new manager. Atalanta on the other hand, had to consider the Italian who was eventually appointed to replace Angelo Gregucci.

Although he started on a bright note, poor results became the main issue between the Italian Serie B winner and fans of the Bergamo based club that eventually led to his exit from the club.

Conte returned to his former club where he began his career in football management as an assistant. The Série B club appointed Conte intending to secure promotion to the top flight.

Conte successfully secured promotion for Siena ahead of the 2011–12 Serie A season. This was the second club Antonio Conte had led from the Série B to the Italian football top flight within a short time.

The Italian who’s already led two lower division clubs to top-flight status as well as lifting the Série B title was already saddled with the responsibility of bringing back the glory days to the club.

He spent the majority of his playing career with ‘The Old Lady’ winning 14 major trophies which include five Série A, one Coppa Italia, four Supercoppa Italiana, one Champions League, one UEFA Cup, one Intercontinental Cup and one UEFA Intertoto Cup.

Amid high expectations, Conte was able to build a new team with a new philosophy and style of play which had some of the biggest names like Andrea Pirlo, Giorgio Chiellini, Leonardo Bonucci, Andrea Barzagli, Arturo Vidal and Mirko Vučinić,

He led Juventus to the Série A title in his first season but was unable to lift the Coppa Italia trophy following the defeat to Napoli in the final.

The following season, Conte and his rejuvenated Juventus players returned to win the Italian Serie A title. However, Conte could not replicate the Série A success in the Champions League as the Italians were eliminated by eventual winners Bayern Munich.

The club began the new season on a high fly by winning their second consecutive Supercoppa Italiana in 2013 and made it three consecutive Italian Serie A titles.

Conte won his third Série A title with Juventus with a record 102 points and was also the club’s 30th league title. The only trophy missing amid high expectations for European silverware was the Champions League and Europa League.

He failed on two occasions to reach the Champions League final and also lost in the semi-final of 2013/2014 UEFA Europa League to Portuguese giants Benfica.

He brought a new phase in the history of Juventus after a series of disappointing results in all competitions.

He was appointed to lead the Italian Men’s National Team to the Euro 2016. He sealed the qualification for the tournament.

Following Italy’s failure to achieve good results in the tournament, it was later announced he would be leaving his role at the end of the Euros.

Conte began his career with the Italian Men’s National Team on a bright note and won over ten matches without a defeat.

Conte’s brilliant stats in the Italian Serie A with Juventus where he won three consecutive titles had already aroused Chelsea’s top hierarchy who had run into the market in search of a perfect fit for the top job at the club.

He became Chelsea’s new head coach from the 2016–17 season followed by the signing of a three-year contract with the club. Conte began his journey in English football like a house on fire and recorded 13 consecutive league wins.

With all the loads of records surrounding him, Conte officially led Chelsea to the Premier League title in his first season.

Although the London based club had some of the best of players in the division, it was more of a struggle for a Champions League qualification in his second season with the club.

Conte however justified his poor league form with an FA Cup final victory over Manchester United. Chelsea finished outside Champions League qualification and was made to enter the new campaign as a Europa League team.

The Italian manager was eventually relieved of his duties as head coach of the London based club.

In total, Antonio Conte won two trophies with Chelsea, winning the Premier League in his first season and the FA Cup during his second spell at the club.

Inter Milan had struggled over the years since the club’s dominance in the 2009–10 season.

Conte’s mission was more of building a new team just as how he did with Juventus that led to three consecutive league titles.

During his first season, he managed to assemble a new team that finished second at the end of the campaign thereby securing qualifications for the Champions League.

In his second season, he won the league title, bringing to an end Juventus’s nine years of nine dominance.

In preparations for his third season with the Milan based club, Conte’s exit was announced and he was eventually appointed manager by English Premier League side Tottenham Hotspur.

Conte won the league title with Inter Milan for the first time in eleven years. He also finished runners up in the UEFA Europa League.

Following the sacking of former Wolverhampton Wanderers head coach Nuno Espírito Santo who helped the club preserve top-flight status, Conte was announced to be his replacement.

He won his first trophy as a football manager will Italian Serie B side Bari when he led the club to the second division title and secured automatic promotion to the Série A.

He spent two seasons with the club before switching to another top-flight team.

After a long wait for domestic and European glory, Juventus president Giuseppe Marotta sought to bring Conte who’s already grabbed the headline with his performance.

The manager brought back smiles to Juventus by lifting the title during his first season as well as successfully building a formidable team. The Italian went on to win three consecutive titles and two Supercoppa Italiana.

He also came close to winning a European silverware but was eliminated in the UEFA Europa League semifinal by SL Benfica.

His upward rise in football management saw him lead Premier League side, Chelsea, to successful outing in his first season. The Italian however had a poor outing during his second season thereby finishing outside Champions League qualification.

Nonetheless, Conte still won the FA Cup with Chelsea before heading for the exit door.

Following a near-perfect stint in English football with Chelsea, Conte arrived at Internazionale to turn the fortunes of the club.

During his season with the Milan based club, he led them to a Champions League spot, finishing second behind league winners Juventus.

The following season, he continued from where he left off with a commanding performance which led to Inter Milan league win, ending Juventus nine-year dominance.

Internazionale league title in the 2020/2021 season was the club’s first title in eleven years.

He is known for using the 3–5–2 formation. He switches from a more defensive variant,

He also prefers an out-and-out striker backed by an attacking box-to-box midfielder.

Antonio Conte is one of the best managers in Italy. He’s coached top clubs like Atalanta, Juventus, Inter Milan and is currently with Tottenham Hotspur.

MLS Golden Glove: Goalkeeper of The Year Award winners 1996 to 2021